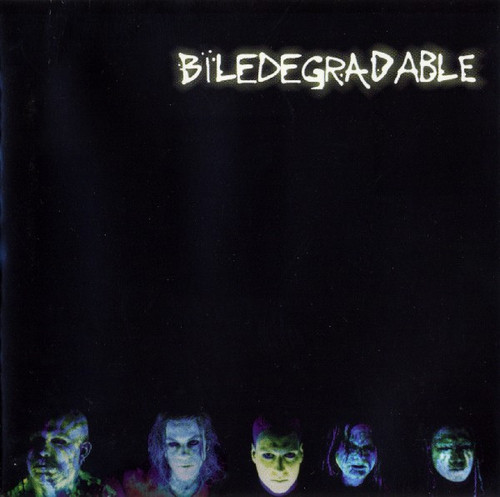 1. My Generation
2. Rubber Love
3. Degradable
4. Fascion (demo)
5. My Generation (Original Intro)
6. The Phantom God
7. Planet Weather Control
Bile, Biledegradable (Energy, 1997)
If it were possible to get any more socially unacceptable than Bile already were with their first two albums, they wanted to do it. And they threw down the gauntlet with the first few notes of their third disc, Biledegradable, by starting it off with an absolutely iconoclastic cover of The Who's "My Generation." It's pure Bile (except that they didn't find any ways to stick the word "bile" into the lyrics gratuitously anywhere). Loud, slow, sludgy, with Krztoff's patented "I'm a debarked dog in a torture chamber" voice. I'll put it this way: if you like Bile's first two albums, and couldn't care less about The Who, you're gonna love this.
Then the album does something... different. "Degradable," the album's third track, starts a sharp digression from their previous work. It's still unmistakably Bile, but instead of the raw aggro stylings of their first two discs, "Degradable" has an acidhouse sound to it. It's still too slow and rough-edged to be techno, but it works the beats and loops. Could Severed Heads have done this in the eighties? You bet they could. Think of it as a sort of "back to the roots" kind of thing.
Those of you wondering "what happened to Bile?" will not be confused for long, however. The rest of the disc shifts back and forth between the two styles capably, which should make fans of both camps happy.
Not as much a must-have as Teknowhore, but a fun little piece of merrymaking all the same.